I remember our second house in Glenrothes, Caskieberran precinct. All the streets had some connection to Sir Walter Scott:  Marmion Drive, Waverley Drive, Kenilworth Court, Abbotsford Drive. Wonder what Barthes would have made of these signifiers? 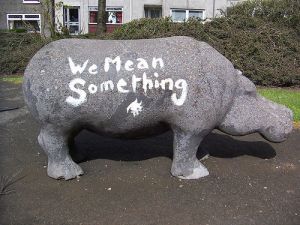 Thanks to Douglas McIntosh for the photograph

I remember the concrete hippos and mushrooms which dwelt amongst the precincts and parks.  For some reason their presence invoked a sense of comfort and made people smile. They were created by the town’s public artist which sounded like a good job to have.

I remember my morning paper round.  Up at 6.00am, almost every day of the year. Rain, hail, sleet, slush, snow and sunshine.  A liberating sense of freedom, moving through the landscape before the town had woken up.  Dark cloaked mornings in winter, beautiful fingers of light in summer.

I remember I had to deliver one copy of The Financial Times. It would sit like a slice of pink luncheon meat sandwiched within the gray tower of Daily Records and Couriers.  It was for a Mr Mason, who, many years later, I discovered was the father of the Poll Tax.

I remember our one day wildcat strike at the R.S. McColl paper shop. It was planned for maximum impact on a Thursday when the local paper – The Glenrothes Gazette – came out.  We ended up being interviewed by The Gazette and made the front page the following week.  Our pay was increased from £1.25 a week to £1.75 a week.  Result!

I remember that following the paper round pay rise, I could buy an album every second week.