Fife Folk-Lore: Cures for whooping cough and other ailments 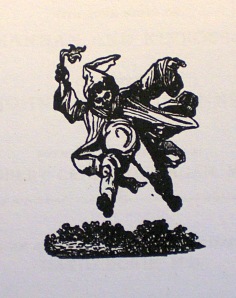 (1) Passing the child under the belly of a donkey;

(2) Carrying the child until you meet a rider on a white (or a piebald) horse, and asking his advice: what he advises has to be done;

(4) Taking the child to a gas-works. During an outbreak of whooping-cough in 1891, the children of the man in charge of, and living at, a gas works did not take the complaint. As a matter of fact, the air in and near a gas-works contains pyridin, which acts as an antiseptic and a germicide;

(5) Treating the child with roasted mouse-dust;

(6) Getting bread and milk from a woman whose married surname was the same as her maiden one;

(7) Giving the patient a sudden start.

Breathing the smell of freshly dug earth was held to be good for whooping-cough, and also for those who had been poisoned with bad air. A hole was dug in the ground and the patient “breathed the air off it.” A “divot” of turf was sometimes, in the old days, cut and placed on the pillow.

How to get rid of Warts:

(1) Rubbing with a slug and impaling the slug on a thorn. As the slug decays the warts go;

(2) Rubbing with a piece of stolen meat, as the meat decays the warts go;

(3) Tying as many knots on a piece of string as there are warts, and burying the string. As the string decays the warts go;

(4) Take a piece of straw and cut it into as many pieces as there are warts, either bury them or strew them to the winds;

(5) Dip the warts into the water-tub where the smith cools the red-hot horse-shoes in the smithy;

(6) Dip the warts in pig’s blood when the pig is killed.

Piles are treated by:

(i) sitting over a pail containing smouldering burnt leather;

(2) the application of used axle-grease.

All of the above from County Folk-Lore Vol VII. Examples of Printed Folk-Lore concerning Fife with some notes on Clackmannan and Kinross-Shires collected by John Ewart Simpkins (London: Sidgwick & Jackson for the Folk-Lore Society, 1914).

Now Playing: The Owl Service and Alison O’Donnell – The Fabric of Folk

3 Responses to Fife Folk-Lore: Cures for whooping cough and other ailments