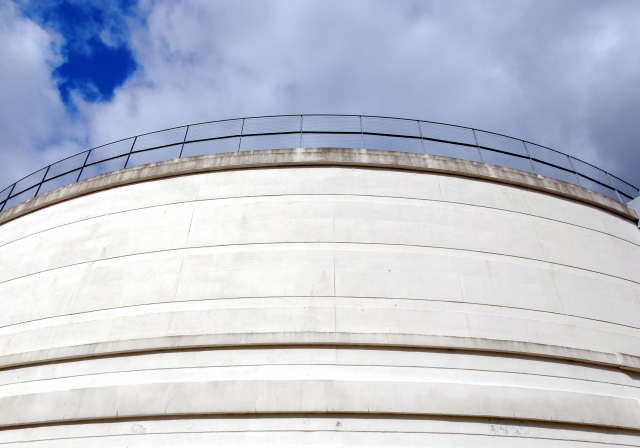 Crossing the celestial line, a cloud on the first day of Spring

The Caskieberran water tank, is a structure etched in the memory of growing up in the New Town of Glenrothes.  At that time, the tank was a grey monolith constructed at the highest point in the precinct where we lived. (1). It towered over the landscape, a mystery in concrete with no obvious sign of entry or exit. What was it really for? – a question much debated in the school playground. Perhaps, like an iceberg, it was the visible component of a vast, underground structure that constructed the hippos and mushrooms that dotted our landscape.

Or possibly, it was full of some mind-altering drug pumped through the water supply to create a compliant polis, bearing in mind that most folk had been transplanted from elsewhere in Scotland and thrown together on this greenfield site of former farmland.

By coincidence, a Proustian revisit, last weekend, coincided with the vernal equinox. That day when the Sun traverses the imaginary line in the sky above the Earth – the celestial equator – heralding the first day of Spring. As if on cue, a heat-beating-sun emerged overhead to project great swathes of light over the gleaming edifice of the water tank now painted brilliant white. Directly above, a spring-blue canvas hatched swirling wisps of translucent cloud. A cinema show of cumulus, breath and breeze playing out across the sky..

A graffito at the base of the water tank anchors a nodal point in the time-memory continuum. Grey hued images from the past merge with the brilliant white and blue of the present moment. The wider thought as to what will be the defining colour of a world to come: breathing green; water constrained brown; carbon black? …

When the sun crosses the celestial line in future years, hopefully, we will have cared enough for our planet, to sustain the usual ciphers that announce the arrival of spring: hawthorn bursts, daffodils, bee drone, butterflies and chiffchaff song.  The reassurance of invisible cycles made visible, of a world continuing to turn.

And with an eye to those future first days of Spring, no matter where we find our feet are standing, there will be a nod to past turnings remembered.  Of a world at a point in the web of time. That cloud, on the first day of Spring, 2016; a landscape of concrete mushrooms and hippos; a gleaming white water tank; a farm and a New Town precinct both called Caskieberran …

The colours of a world to come.

(1) The housing schemes in Glenrothes were called precincts, taking their names from existing hamlets or from the farmland on which they were built such as Caskieberran and Rimbleton.