It is futile to search in our theories of architecture or dérive for any other motive than the passion for play.

As we enter Glasgow Green, my daughter takes aim, like an archer pulling a bowstring and points to the horizon. “There it is!”  We both follow the trajectory of the imaginary arrow and gaze over the vast expanse of green common land.  From all directions,  ant-like threads of people are drifting towards the iconic structure of Stonehenge sitting in the landscape.  The lines of people are converging and congregating around the monument and we can hear the distant sounds of carnival.  Feeling the totemic pull of the stones, we set off to join them.  This is why we have come.

Except this Stonehenge is Jeremy Deller’s ultimate bouncy castle version. An interactive art installation named Sacrilege and part of the Glasgow International Festival of Visual Art.  Such is the popularity of Sacrilege, that, on arrival, we are assigned to one of the two holding ‘pens’ which allow up to one hundred people, at a time, to assemble and wait for a fifteen minute ‘interactive experience’ with the exhibit.  As we sit in the sunshine, and soak up the celebration taking place amongst the stones, it really is a joy to watch the utter delight on faces as they attempt to run, jump, roll, lie or simply walk. Toddlers are happy to bounce up and down on the spot whilst the older kids are going off like pressure cookers, doing cartwheels, forward rolls, playing tig and body slamming into the iconic henge.  Adults are given licence to do pretty much the same if they can keep up.  A tribe of teenage goths stick to the perimeter, appearing to be disoriented by the brilliant sunshine and riot of lurid green plastic. Some pilgrims simply take refuge at the base of a stone and observe.

What also contributes to the Sacrilege experience is how the area is completely cleared between pen changeovers. For a short period of time  the empty installation is replete with possibility, creating a sense of playful anticipation in the crowd as shoes are kicked off,  jerseys discarded and bags are heaped in piles.  The good-humoured security crew attempt to enforce their mock authority as they patrol the ‘control zone’ between crowd and structure, yakking into their walkie talkies.  An anarchic youngster unable to contain herself, sneaks under the rope and makes a dash for the centre before being retrieved, kicking and screaming, by a slightly embarrassed parent. The heid bummer security guard with the megaphone barks out instructions  (“no shoes, heavy bags, human sacrifice”) and the rope is finally dropped with all the ceremony of an Olympic starting gun. It’s a mad, mad rammy to clamber on to the structure and within seconds all ontological baggage is released by the sheer thrill of being and bouncing in the moment. When our turn comes around we (I!) soon find that fifteen minutes of plastic stone hi-jinks is pretty exhausting but exhilarating. We are part of a communal assemblage, literally jumping for joy. Sacrilege indeed.

I’m not overly familiar with Deller’s work, but afterwards it struck me that there is a lot more going on with this bouncy castle than at first may appear.  I’m reminded of Ralph Rumney and Guy Debord’s attraction to the ludic ideas of Huizinga who proposed that spontaneity, play and festival should be a vital part of daily life and a potentially transformative agent to break free from the ‘stultifying nature of boring, non-ludic life’.  Hussey suggests that Huizinga’s arguments had a revolutionary significance for Debord who was intrigued by the suggestion that games or spontaneous play could be experimental forms of new social behaviour.  Rumney claims to have introduced Huizinga’s Homo Ludens to Debord which was instrumental in providing him with a vocabulary for thinking about and anticipating ‘the construction of situations’. If nothing else, Deller has certainly constructed a situation. I’m also reminded of Bakhtin’s notion of the carnivalesque whereby the participation in carnival can remove individuals from the social hierarchies of everyday non-carnival life and allow  the exercise of normally repressed energies to flower. Perhaps Sacrilege can be viewed as a practice of Situationist détournement.  By hi-jacking the iconic image of Stonehenge, and all of its associated cultural baggage, Deller has created a new artwork that celebrates free assembly, mass appeal and the carnivalesque. Perhaps more importantly it is playful, fun, cheeky and joyous.  Not terms that would leap to mind should you visit the original Wiltshire version these days.  I understand that Sacrilege is now heading to ‘the Olympics’ and it will be interesting to observe whether the Glasgow experience will be ‘allowed’ to translate to a very different cultural space.  Will anyone be able to pitch up at will, freely assemble and take part? We shall observe with interest. 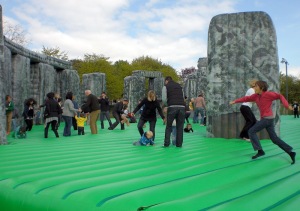 And as we join the dehydrated but elated crowd drifting over the green common land to the winter gardens of the People’s Palace, we also take the chance to view the people’s history of Glasgow.  A history of grim social conditions and top-down imposed planning failures, leavened with histories of resistance. My daughter is particularly taken with two iconic artefacts from popular culture: Billy Connolly’s banana boots and Alex Harvey’s leather jacket.  Two performers, who also know/knew something about invoking the carnivalesque.

So here we are, with freedom
within our sweaty, greedy, grasps.
So remember this, boys and girls,
when freedom comes along…
DON’T pish in the water supply…

9 replies on “Bouncing on Sacrilege: Deller, Debord and Jumping for Joy”

Thanks for the reblog antonio.

Love it, love it – Huizinga to the Alex Harvey Band without human sacrifice!

Thanks Diana.Have always had a soft spot for Alex Harvey as SAHB were one of the first gigs I saw!

Great work! I’ve often got this sense of communal play with art exhibits – there were some giant inflated balloons at the Hayward Gallery, and Gormley’s Blind Sight, as well as his lovely sculptures at Crosby beach.

Thanks very much. There are some Gormley figures along the Water of Leith in Edinburgh and it is quite magical when you alight on them for the first time. I grew up in the New Town of Glenrothes and some of the public art there had a very playful effect on me. Lines of concrete hippos, dinosaurs, giant flowers dotted around etc.

Marvellous post. If you get the chance the Deller retrospective at the Hayward in London is brilliant, his connections with contemporary folklore and culture are second to none. I particularly admire the fact that his work is typically community and participatory based, he is merely the conductor for the enthusiastic efforts of others.

Thanks Matt. I would love to see the Deller exhibition but unlikely to happen. Will certainly take more interest in his work in future though. Like your comment about him being the conductor. Go have a bounce when it comes to London!