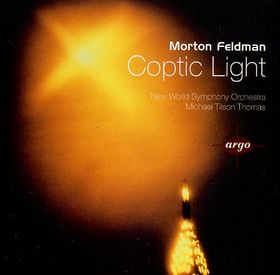 A sounded weave ‘pedals’
on spectral slubs of
small differences.

Time’s flow, slows, to stasis
a colour field revealed,
in asymmetries of warp and weft.

There is no horizon here – only
a fullness of field, the patterning
of an essence, stretched
into aura.

All around is sound

All here is light.

Coptic Light (1985) is a late work by Morton Feldman which was first performed by the New York Philharmonic, in 1986, just a year before he died.  In many ways, Coptic Light is an atypical late-Feldman piece, lasting just under thirty minutes. His major compositions from 1977 onwards had been exploring longer – and some would say extreme – duration with the vast sonic canvases of For Christian Wolff (1986) at around three hours; For Philip Guston (1984) lasting over four hours and String Quartet No. 2 (1983) clocking in at up to six hours.

In Give My Regards to Eighth Street (2000), Feldman reveals some of his inspirations for Coptic Light.  Commenting on an earlier composition, Crippled Symmetry, (1983) Feldman notes how his growing interest in Middle Eastern rugs had made him question what is symmetrical and what is not. In particular, he noticed the great variations in shades of colour in the rugs, as a result of the yarn having been dyed in small quantities. Similarly, the mirror image and patterns in many of these rugs was characterised by small variations and less concern with the exact accuracy of replication. This prompted Feldman to think of a disproportionate symmetry in repeating patterns – “a conscious attempt at formalizing a disorientation of memory”.

Writing about Coptic Light, Feldman expresses his “avid interest in all varieties of arcane weaving of the Middle East” and in particular the stunning examples of early Coptic textiles on permanent display in The Louvre. What struck Feldman about these fragments of coloured cloth was “how they conveyed an essential atmosphere of their civilization”. Applying this idea to his music, he asked himself what aspects of music, since Monteverdi, might determine its atmosphere if heard two thousand years from now.

An important technical aspect of the composition was prompted by Sibelius’s observation that the orchestra differs from the piano in that it has no pedal. Feldman therefore set out to create an ‘orchestral pedal’ continually varying in nuance. This chiaroscuro is both the compositional and instrumental focus of Coptic Light.

In this particular concert, Coptic Light was performed alongside Charles Ives’s The Unanswered Question, (1906), which was perhaps the perfect choice. Two great American explorers, of the sonic landscape, bookending the 20th Century. Ives’s own subtitle for The Unanswered Question was ‘A Cosmic Landscape’.  As the plaintive trumpet intones and repeats ‘The Perennial Question of Existence’,  The Question remains Unanswered and eventually all fades to silence.

Give My Regards to Eighth Street: Collected Writings of Morton Feldman, edited and with an introduction by B.H. Friedman, afterword by Frank O’Hara (Boston: Exact Change, 2000).

Great post. I love ‘The Unanswered Question’ but haven’t heard any of Feldman’s work – I’ll have to give it a try.

Thanks Paul. It was great to hear ‘The Unanswered Question’ performed live. Has made me go check out a lot more Ives as well. In terms of an entry point into Feldman, ‘Rothko Chapel’ or ‘Piano and String Quartet’ are a couple of ideas.

“The Unanswered Question” is one of the pieces I’d like played at my funeral. It will, I suspect, be most apt.

Perhaps if could also be played at any event where any national anthem is meant to be heard.