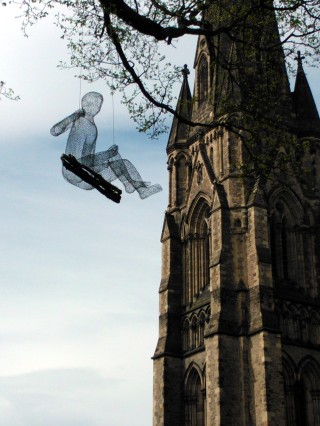 would feel the emotion

……………that almost startles us

It often happens.  A sensation at the edge of perception. A glint of light, a fluttering of movement. The feeling that some-thing has flitted across the threshold of the senses.

Something there – but not there.

And so it was, walking along the tree-lined footpath by St Mary’s Cathedral in Edinburgh. Looking up, amongst the trees it was difficult to see it clearly at first. Something metallic, floating, but also appearing to be entwined amongst the branches, merged with the sky. It was only when a light breeze, initiated a gentle rocking movement that the suspended human form fully emerged.

From another angle, the drifting figure resembled a pencil drawing sketched on to the sky. A shaded human form floating against the blue canvas, slowly dissolving back into leaf and branch.

The gentle motion, both hypnotic and dreamlike conjured up thoughts of Solveig Dommartin’s character, Marion, in Wim Wenders’ Wings of Desire.  A lonely trapeze artist, inhabiting the space between ground and sky, who entices an angel down to Earth.

I have subsequently read other people describe the St Mary’s work as “sinister, creepy or disturbing” and it certainly startles you when you first look up and see it. An experience that I’m sure would be intensified if you encountered it in the dark under moonlight. However, for me, the figure conjured up a sensation of something otherworldly, yet strangely familiar. A fluid form of substance and air, swinging silently, and like ‘Marion’ suspended between the earth and sky.

From a distance I watched for a short time as many people passed along the footpath. The vast majority did not look up or see the figure suspended amongst the leaves. Silently watching, waiting to transform the everyday city into an encounter with the uncanny.

Now playing: Nick Cave and the Bad Seeds – The Carny

I have found out that the sculpture is a work called Spirit by Aliisa Hyslop, a Finnish/Scottish artist. Spirit is presently part of an exhibition at the Arusha Art Gallery.

The quotation from Rilke’s Duino Elegies are the last lines of the translation by David Young (New York: W.W. Norton & Company, 1978). Wim Wenders cites Duino Elegies  as the initial inspiration for Wings of Desire.

9 replies on “An encounter with the uncanny”

This is marvellous. It’s funny, but even before I scrolled down far enough to see your mention of Wings of Desire (which happens to be my favourite film ever), my immediate thought was ‘that’s Marion’. Great minds, obviously…

Thank you and delighted to learn that the image also conjured up Marion. Great minds indeed 🙂 Likewise, love ‘Wings of Desire’. I also like how it is a great document of Berlin before the Wall came down.

A wonderful example of the power of art to change perception. Like the connections – Rilke to Wenders.

Thanks Diana. I do like when an image sets off a trail of associations.

Funny how people don’t look up.

I sometimes wonder if were are actually evolving to look down! Interesting to look around a station platform waiting for a train. Almost everyone looking down into their phones. (Self included!)

It would be wonderful to wander about and unexpectedly see that at night. Ditto love Wings of Desire. On the final note I read somewhere doctors are now talking about injuries sustained by people walking along the street looking into their phones. Much enjoyed this post as always.

Thanks Alex. Almost wish I’d first encountered the figures at night. Not surprised about the injuries. Quite common to see folk in motion peering into their phones at the same time.