I recently tried to answer a few questions about psychogeography for the wonderful Prehistories website.  Here is an extract:

For any readers who haven’t encountered psychogeography before, could you give a brief explanation of the term?

The word may be unfamiliar to some people but I would guess that most people will have experienced it. To adapt Joseph Beuys: Everyone is a Psychogeographer.

Psychogeography has become a much used and abused label but a broad definition is the influence of the geographical environment on the human mind. Think back to when you were a child. You had little interest in moving through space in a linear fashion from place A to place B. Time was much more fluid. You would encounter playful distractions in the landscape – a tree to climb, or in my case, a concrete hippo or mushroom in the New Town of Glenrothes. You might find sticks to pick up; objects to poke with a stick. You might sit down to observe a line of ants crawling across the pavement. Following the sound of a distant ice-cream van may lead you through new routes in familiar streets.  You may have pondered questions such as why does that building have such a large fence around it? Why does that sign say ‘Keep Out’?

Fast forward to walking through an unfamiliar city without a map. It is likely that you will encounter different zones of feeling as you move through the city. You may end up in an area that for whatever reason makes you feel uncomfortable and you want to walk away quickly. Conversely, the particular ambiance of an area make you feel relaxed or even carnivalesque. At other times a particular city environment may make you feel literally ‘out of place’.

Contemporary psychogeography has many different strands which makes it difficult to pin down precisely, but from the above we can pull out certain common characteristics:

The follow on question, may be, does the environment have to be like this and how could it be changed (or preserved)?

In the history of ideas, most of the literature about psychogeography refers back to the Letterists and the Situationists who defined and developed their psychogeographic activities, such as the dérive – or drift – in an urban environment during the 1950s. However, we would argue that what is now often termed psychogeography is just a label applied to activities and practices that human beings, across all cultures, have undertaken as soon as they started to walk in the landscape.

Psychogeography sets for itself the study of the precise laws and specific effects of the geographical environment, whether consciously organised or not, on the emotions and behavior of individuals.

Guy Debord, Introduction to a Critique of Urban Geography, (1955)

However, our own research has uncovered that the term was used much earlier by the American anthropologist, J.Walter Fewkes in a non-urban context in the early 1900s:

… psychogeography, deals with the influence of geographical environment on the human mind.

Fewkes was using the term to examine the Native American Hopi people’s strong connection with their landscape. The arid landscape led them to develop a set of beliefs, practices and rituals, such as the rain dance, to appeal to the sky gods to deliver rain.

We have yet to see any mention of Fewkes in the psychogeographic literature but firmly embrace the idea of an expansive psychogeography: the influence of the geographical environment on the human mind in both urban and non-urban contexts. This also recognizes the presence of the non-human world in our landscapes.

To perhaps bring back all of this to a concrete example, here is a photograph, taken in Dunfermline, of a fairly typical designed environment. There are two laid out, planned footpaths and what would have been a green space with two trees:

It is clear to see that the planned footpaths have been ignored and an alternative ‘desire path’ has formed over the green space between the trees. A good localised example of people, whether consciously or unconsciously, being influenced by the landscape to question and change their local environment through footfall democracy!

The full interview can be read here and highly recommend that you check out the Prehistories website and also @DrHComics on Twitter. Here is an example of  Hannah’s distinctive take on folklore: 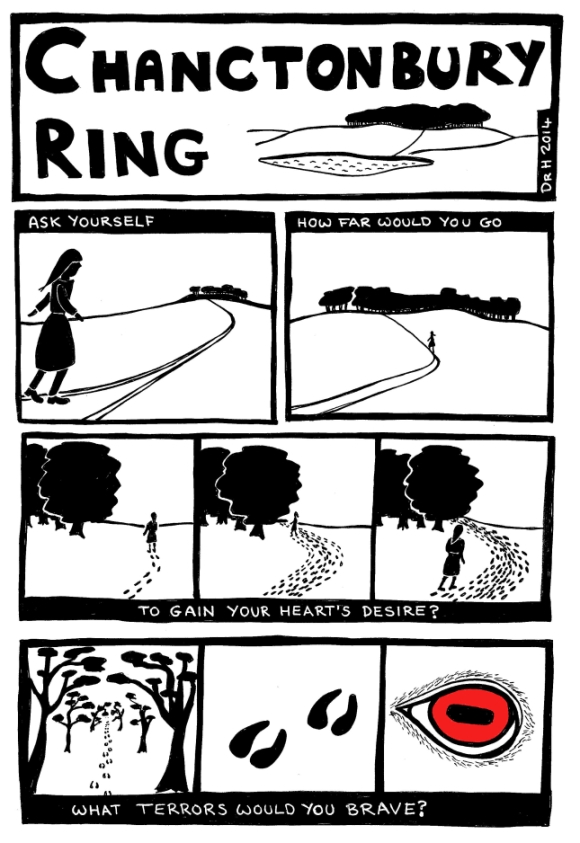 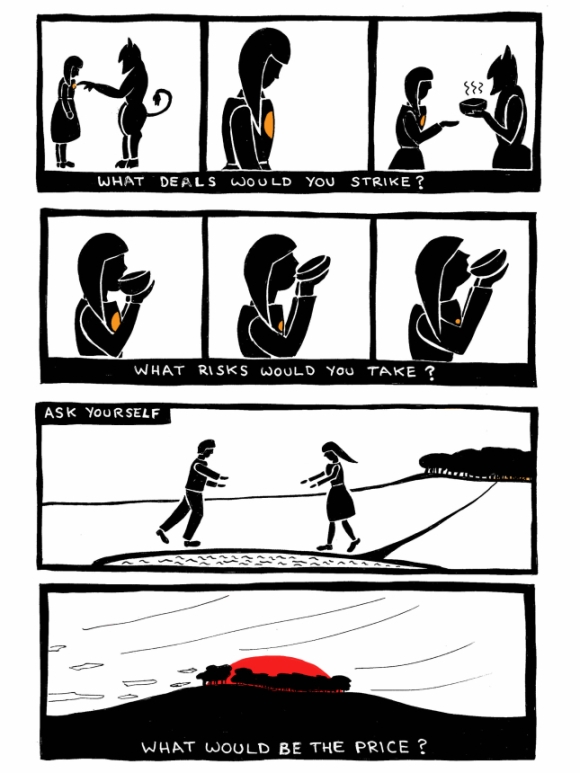