We have already written a fairly long piece on the painter William Gear (1915 – 1997). Gear was one of only two British members of the post-war, European, avant-garde movement CoBrA in the 1940s. He went on to produce some of the most radical and controversial paintings of the 1950s.

In the centenary year of his birth, a major retrospective of his work has recently arrived in Edinburgh. Previously shown at The Towner Art Gallery, Eastbourne, where Gear was curator from 1958-1964, it is a fabulous retrospective show and a privilege to see so many of his works collected together. From early dabblings with Surrealism through to the radical monochrome abstractions of the 1950s and the singing colours and sculptural forms of his mature style from the 1960s to his death in 1997.

The exhibition is showing at City Art Centre until 14th February 2016 and comes highly recommended.  Rather than write a full review, we would only suggest that you consider visiting the exhibition if you can.

Walking around for the first time a few phrases caught the ear and eye:

I was born and brought up on the Fife Coast. Harbours, boats, the sea. It is in the blood.

I was a Parisian now.

(Gear moved to Paris in the late 1940s where he held his first solo shows and joined CoBrA after meeting Appel, Constant, Corneille and Jorn. Reading this line particularly struck a chord after the brutal terrorist attacks on Paris on Friday 13th 2015. An attack on a city that has always drawn artists to it and excels in celebrating both the highest pleasures and everyday joys of life).

I cannot say in truth that my painting is entirely non-representational, though at no point am I ever obsessed with the rendering of objects in front of me or remembered as such. I continually find that my pictures, when finished, are evocative of something within my visual experience. It may be the corner of my studio, or the view from the window of trees and the Seine and the buildings of the Île de la Cité opposite, or a generalised landscape, interior or assembly of forms.

Trees and boulders take on the menacing form of hidden terror. Imagination plays tricks with the eyes.

In conjunction with a fine exhibition catalogue, a magisterial new book has been written by Andrew Lambirth which is particularly strong on placing Gear within an international context. 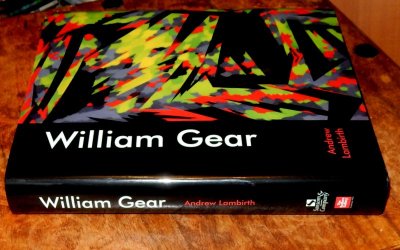 We were also delighted and gobsmacked to stumble across a mention of our essay in the Afterword: 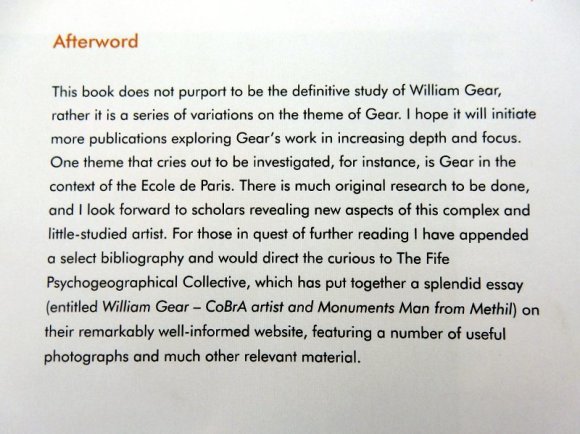