A fox’s brush is

as rare
as a unicorn’s horn,
or dragons teeth
on the island of Colonsay.

The island of Colonsay has, been fox-free and is officially recorded as such in documents dating back to 1892. This week a lone red fox was found dead at Scalasaig with a large ga 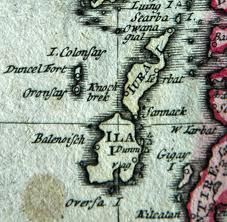 sh behind its left ear. It is believed to have bled to death. How the animal reached Colonsay remains a mystery. The nearest place is Islay which is 15 miles away by sea.