Fragments of Istria: an Assemblage

We could eat this sky.

Stretch up, scoop out

and taste the fanfare

Out of red earth 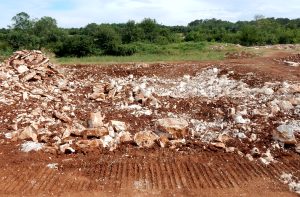 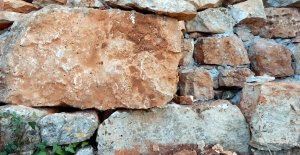 No neatly packaged hay bales in the uncanny rural. Creatures of twilight, sit hunched in the corner of smallholdings, backs turned. In fading light, walking past these halo-skewered field dwellers: was that a lengthening shadow? a sigh? a suggestion of movement?

They would appear in the adjoining field at around 7.00pm each evening. A symphony of bells heralding their arrival. We never did see where they came from. They would feast in the field for around half an hour, a clanking cacophony of movement. Occasionally, one would come over to eye us up, usually the smallest with the highest pitched bell. Curious young eyes stared us out. Yet, these eyes tapped into something much older. Some fundamental rhythm of the land. Jaws rotating in perpetual motion and then, as they do, leaping into the air as if the earth had administered an electric shock to their hooves. A display of exuberance and delight in contrast to the slow, deliberate movements of the herd elders. They kept their heads down, chewing, chewing, chewing. After a cycle of time, which we were not party to, the deepest, most sonorous bell started to sound out a rhythm. The largest goat of the herd was calling time and starting to amble away. Gradually, the other goats began to follow, bells around their necks congealing into a moving mass of sound. A few short explosive trills as the stragglers ran to catch them up. We watched as the herd turned a corner and listened as the bells faded into the distance.

A visit to the small hilltop town of Motovun and very surprised to meet this straw giant and his dancing acolytes. Staring us out with his silent gaze, he must have been over twenty feet tall,  At his feet, some folk ritual or dance taking place, arms thrown open to embrace the sun. Something of the Wicker Man about it all. 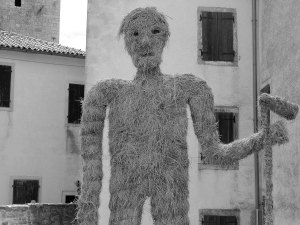 As far as I could find out, his name is Veli Jože, a giant who lived (lives?) in a local truffle-rich forest. Local stories suggest that he has been known to enter the town and physically shake the church tower to sound the bell.

To reach Motovun, it is a steep walk up the hillside to reach the town perched on top. Whilst not religious, was touched by the care and beauty displayed in the construction of this minimal roadside shrine.

Motovun sits is on a hill in the Mirna valley and evidence of human settlement dates back to prehistoric times when it would have been surrounded by water. The river Mirna is Istria’s longest river and legend has it that Jason and the Argonauts fled down the estuary after having captured the Golden Fleece.

Another hill-top town, this time with a twist. Dvigrad is a relatively well-preserved mediaeval ghost town in the Draga valley. The population was initially decimated by the Black Death in the 16th century and finally abandoned completely in the early 1700s. As the town was unoccupied, it was spared from the destructive ravages of war which were a constant feature on the Istrian peninsula. Today, the town gates still exist, and it is possible to walk around the town walls. The defence tower still rises to cut the blue sky and interior room structures of the 200 odds houses are clearly visible. 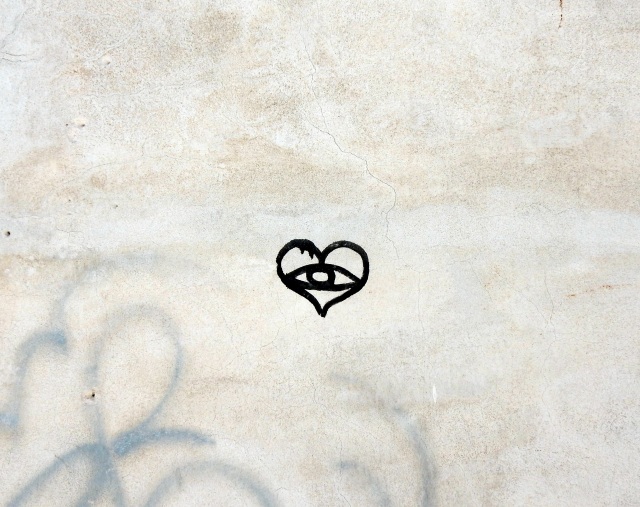 Aura of the town walls: return of the gaze:

To perceive the aura of an object, we look at, means to invest it with the ability to look at us in return … when this expectation is met … there is an experience of the aura to the fullest extent. 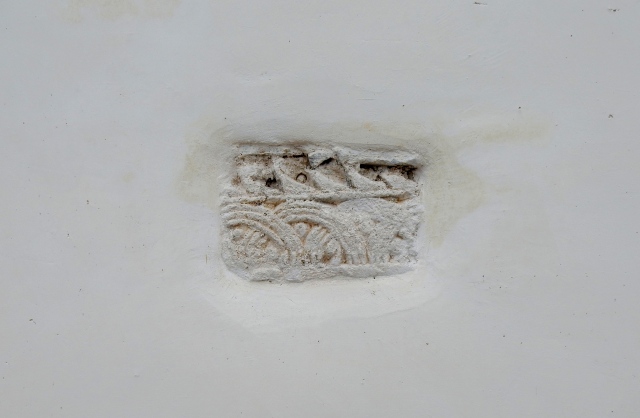 Amongst the networks of rural paths and tracks. 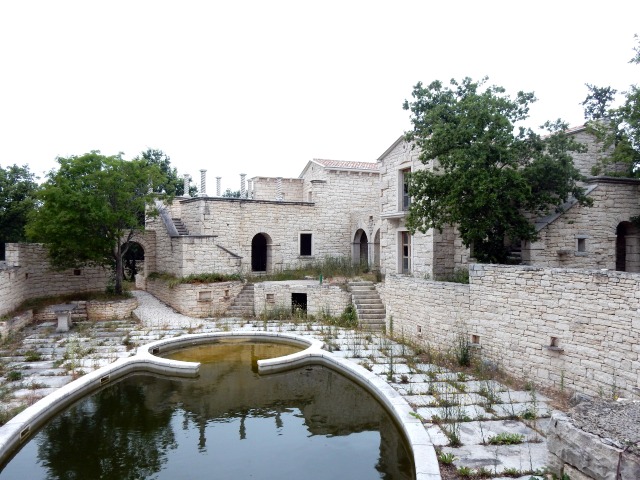 An alien structure in the rural landscape:

the new, never having ever been.

We were staying on the Istrian peninsula in what could best be described as an agricultural hamlet, mostly comprised of smallholdings and cottage style dwellings. These were all constructed in a similar style with what looked like local quarried stone. A network of paths and tracks connected up to other nearby hamlets which were also of a similar architectural style. When we stumbled across the half completed building above, it looked as alien to its surroundings as finding a mountain bothy in the middle of Las Vegas.

The scale of the building was completely out of proportion to anything else locally. The pick and mix collision of architectural styles created a bizarre postmodern mash-up with a tear shaped swimming pool or fish pond, bizarre minaret style columns half-built on the roof and Italian style interiors. What was clear, was that the building was the new that had never been. We wandered around the half completed rooms, bare wires hanging out of walls, yet opulent installed marble bathrooms. Work had clearly stopped some time ago with the extensive grounds already starting to be reclaimed by nature. It was as if we had walked into the film set of a Ballard adaptation, where the crew had disappeared. 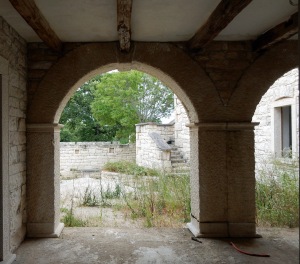 Of course we had to construct some sort of narrative as to what had happened here. Ms A came up with the one that we settled on. The remote location, stilted opulence and rather garish tastes indicated that this could have been a low-key hideaway for some gangster or Mafiosi. Work on the property was well underway when they were either rubbed out, banged up, or cleaned out of money, leaving this rural fun palace to slowly begin to merge back into the Croatian countryside. The new that had never been.

That night, an absence of city light and gravity. We fell from earth, lost our breath, immersed in that plunge pool of dark sky. We learned to gather stars, eat planets for sustenance, grab comet tails to move. The dawn light made us heavy again. We fell back.

13 Responses to Fragments of Istria: an Assemblage