This is not the Garden of Cosmic Speculation

The concept includes the fact that many foreigners have settled in Scotland and contributed to its identity. Indeed, the notions of geology as destiny, the Rock People, and the Atlantic People that plied the shores from Galicia to Norway (from roughly 5,000-1,500 BC) are part of the larger Scottish World …

Anyone who has driven up the M90 motorway in the last twenty years could hardly have failed to notice the St Ninians open-cast coal mine near Kelty.

A landscape transformed and consumed through raw material extraction, technology and human labour. The coloured flecks of jabbing industrial machinery appearing to shrink to insect scale as the vast grey void opened up. An unfolding Burtynsky portrait of post-industrial scarring:

In 2003, the international landscape artist and cultural theorist Charles Jencks was commissioned by the mine owners, Scottish Resources Group, to develop a landform proposal to regenerate the area. Jencks is perhaps best known as an architectural theorist of postmodernism and in Scotland, for landscape design projects such as his own Garden of Cosmic Speculation, the recently completed Crawick Multiverse and smaller scale works at Jupiter Artland (Cells of Life) and The Scottish National Gallery of Modern Art (Landform Ueda).

Jencks coined the project The Scottish World which was based on ideas of the Scottish diaspora and immigration. There was no doubt as to the physical scale of its ambition with four colossal earth mounds representing four continents where Scots had travelled and settled.

Whilst work commenced on the restoration project, and was originally due to complete in 2012, the scheme collapsed in 2013 when Scottish Resources Group went into administration. The site was subsequently taken over by Hargreaves Resources and an agreement was made with Fife Council that would see a degree of the restoration project completed, in exchange for a licence to extract the remaining coal still to be mined. However, it soon became clear that the project would not be completed according to Jencks’ original design although elements already completed would be kept and maintained.  Despite occasional mutterings in the local press about potential futures for the site, it appears to exist today in a state of limbo ‘officially’ out of bounds to the general public.

We thought we would go and take a look.

It seemed barely credible that this was the first weekend in October as we headed in a vague direction towards the contours of the limbo landscape. First, a short detour to Loch Fitty, looking serene, underneath brilliant blue skies punctuated by billowing clouds scudding overhead. A solitary duck on the water placed like a calligraphy mark on a sheet of blue marbled paper.

Looking out over the loch today, it is difficult to comprehend that in 2013, there was a consented planning proposal on the table to drain the water and excavate 7.4m tonnes of coal underneath. (How do you actually drain a loch?) The scheme was only curtailed with the afore-mentioned collapse of Scottish Resources Group. However, the presence of coal workings in the landscape remains evident with a line of black, sooty debris drawn along the shoreline.

From the loch, we couldn’t find any obvious path towards the Jencks landscape but as the ‘European Continent’ mound dominates the area it is easy to set a course towards what looks like a primitive temple complex at the apex of this earth shifted landform.

The weather clearly helped, but the biggest surprise is how the black scarred earth is now re-seeded with lush golden grasses and whilst waterlogged in parts is perfectly suited to walking.  At the bottom of Jencks’ colossal mound, it is identifiably one of his structures, but a rustic, wild version on an explosive scale. All ragged gorse and tufted grasses compared to the carefully turfed manicured versions displayed as artworks. The walk to the top of the earthwork is like walking around the structure of a snail’s shell. An ascent around the unfolding whorls giving spectacular views as we circle higher. Looking to the north, a large body of hidden water provides a sanctuary for a sizeable colony of birds – too far away to identify what they are:

Further around the structure, we look upon another of the completed mounds redolent of Silbury Hill. Will this structure also retain its mysteries when future generations ponder who built it and why?

At the top of the European Continent mound, three tyre and tree structures point to the heavens. Postmodern totems evoking some sense of being placed in a ceremonial landscape. From the highest point, sight lines lock into the elevated energies of the recumbent figure of Benarty Hill, Falkland Hill and what Julian Cope calls the mother mountain of Largo Law. 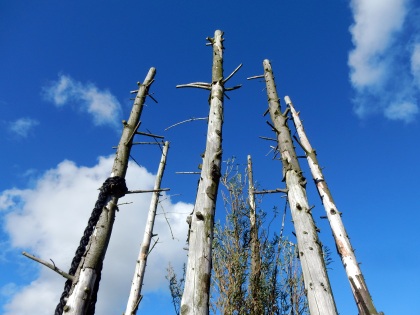 The earth spread out beneath us is a material energy landscape still in flux as it has been for thousands of years. The extracted open-cast void surrounding us directly below. To the east and west a landscape shaped by the deep mining of the Fife coalfield and the towns and villages that grew on the back of it: Kingseat, Ballingry, Kelty, Cowdenbeath, Lumphinnans, Lochgelly, Lochore, Cardenden, Auchterderran. The pit winding gear long since removed from all these places. (although we can still see the winding gear structure of the Mary Colliery at Lochore Meadows which has been left as a memorial to Fife deep mining).

There is also an absence. A village now completely erased from the land on which we are pretty much standing:

Reproduced with the permission of the National Library of Scotland

Lassodie, in the Parish of Beath, was an agricultural community up until the mid-nineteenth century. In 1859, the Lassodie Coal Company was established and a number of pits were sunk which resulted in new housing being built locally for the miners. 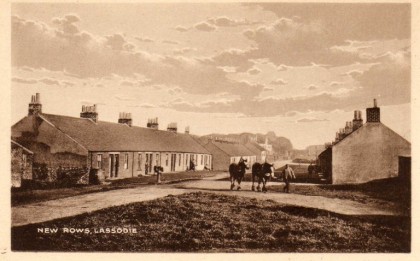 By the early 1900’s, Lassodie housed around 1,400 people and included a village school, a number of shops, including two branches of the Co-Op, a Free Church of Scotland and a corrugated iron village hall. However, like many of the Fife towns and villages, the fortunes of the community were inextricably linked to coal. Two pits were closed after the 1921 coal strike which set in motion the gradual drift of families away from the village. By 1931, all the pits had been closed as they had become uneconomical to keep free from flooding. The remaining families were served fourteen days notice to vacate their houses which were owned by the coal company. The church struggled on for a number of years as a Christian retreat and was used at the beginning of the Second World War as a hostel for refugees from Nazi occupied Europe. The buildings of the village were eventually demolished and almost all material traces of it having ever existed disappeared when open-cast mining transformed the land. A memorial to Lassodie villagers killed in the First and Second World Wars now sits in isolation at the side of the B912 road from Kingseat to Kelty.  Detached from its physical referent it now also acts as a memorial to the ghost village itself. 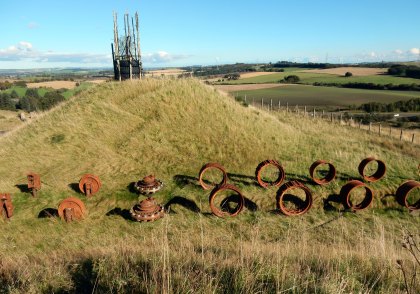 To the South East, the Mossmorran natural gas fractionation plant is clearly visible, belching plumes of steam into the sky. A folded mass of metal glinting in the sun. In the far distance, the colossal turbine structures of Little Raith wind farm spin silent songs of wind alchemy.

An avenue of coal machinery parts has been placed on top of the structure. Transformed from utilitarian metal and concrete into slowly changing collection of weathered patinas across the colour spectrum:

On a landscape of rust 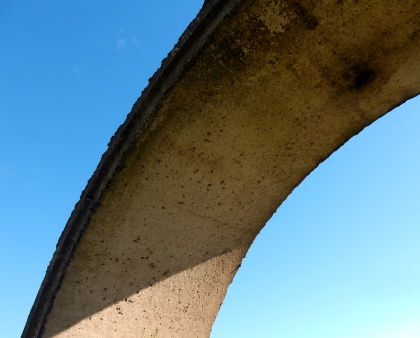 cutting through the blue 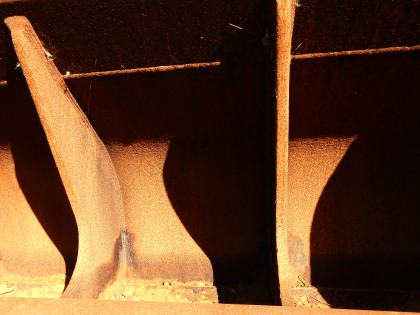 A causeway of hewn rock offers a puzzle to ponder: Stencilled into two rocks: Danzig and Gdańsk. The same physical place that has oscillated between variants of these two names, Prusso-German rule, Polish rule and as a semi-autonomous city-state between 1920 and 1939. 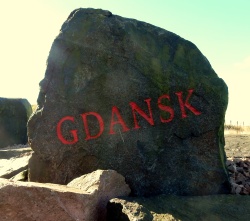 The stones are likely symbols of the strong trade links that Scotland enjoyed with the Baltic region from the late fourteenth century onwards. Many Scots emigrated to the Baltic region and established themselves as merchants and traders. Robert Gordon was one merchant who made his fortunes through the Aberdeen-Danzig trade route. He subsequently funded the foundation of a hospital in his hometown which four hundred years later still stands, now known as Robert Gordon University. By the 17th century Gdańsk was home to an estimated 30,000 Scots and today two suburbs of the city exist called Nowe Szkoty and Stary Szkoty. (New Scotland and Old Scotland).

On another split stone, a French proverb Fier comme un Écossais (Proud like a Scot) is a reference to the Auld Alliance between Scotland and France, established in 1295. 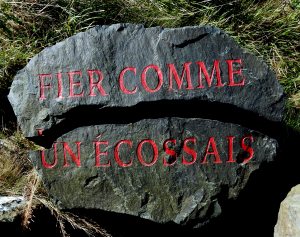 One of the most surprising aspects of the whole area was the constant presence of dragonflies – if indeed that is what they are? – flitting past, resting, or sunning themselves. Magical, flying shards of stained glass, as if materialising out of light and air. I have never seen so many in one area, so ecological conditions must be very favourable for them. Perhaps tangible evidence of a healing landscape.

On the way back down, we reflect on the connections this walk has tapped into. The sense of landscape always being in flux; old energies transitioning to new energies; the wounds of open-cast mining in a process of environmental healing. Of how an outward looking internationalism has been part of the Scottish (and British) psyche for hundreds of years. How we have welcomed refugees in times of crisis. A reminder of how vital this is as resistance to the current raft of Brexit ideologues, attempting to build walls, retreat to nostalgic notions of a country that never existed and shrink imaginations.

And as for Jencks’ stillborn project, we say open it up as it is. It has developed into a fascinating space for walking; nature appears to be transforming the ecology and it is clear that people have started to use it unofficially. On the way back we pick up a path that is easily navigable as an entry point to the site and encounter a few dog walkers and people out for a stroll around the lower levels. A conversation with one of the miners who used to work here illustrates his pleasure in how the land is usable again. He also regales us with a few tales of tax scams and financial deals that he believes went on regarding the management of the site and the failure to create a sufficiently large sinking fund to enable full restoration to take place.

The land is there. Go walk it! 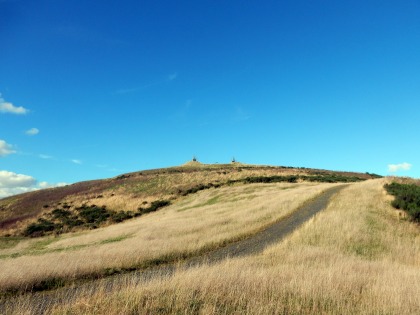 With very special thanks to Kathryn B, who pointed us in the direction and found gold in these lands!

7 Responses to This is not the Garden of Cosmic Speculation