It is a place within easy walking distance from the front door and yet it is unlikely that anyone would stumble across it. It is not on any well-trodden path. However, nor could it be described as a remote location as would be evident if you managed to locate the area on a map. It is almost as if it has slipped through a crack in time and topographic space.

There are certain landscapes where the walker quickly becomes self-conscious that they are an intruder. Where every footfall announces to the non-human world that there is a potential threat moving in the landscape. A cracked twig underfoot that  ricochets through the calm stillness, creating unseen rustlings of unease and the nervous flexing of wings. No matter how quiet you may whisper there is a strong feeling that you are being closely observed and monitored by unseen eyes. It is you who is perceived as the danger in this quiet world. 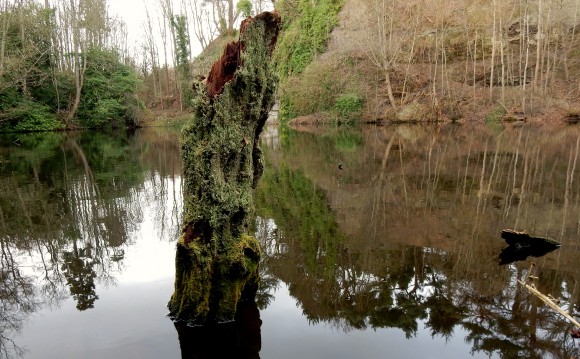 For convenience we will refer to this place as the Heron House on account of the siege of herons that appear to have colonised this world. It is not unusual to see upwards of ten of them roosting in the trees that surround this body of water or swirling silently overhead. As if each wing movement slows down time incrementally, evoking a sky filled gathering of ancient pterodactyl. Until we discovered this place, we had always associated herons as zen-like, solitary stalkers of the shoreline, so it was a surprise to see so many of them in the high branches of this wooded setting. Their presence transforming this place into something that feels forgotten and ancient. Almost a ‘Land that Time Forgot’.

This feeling of being steeped in accretions of time is heightened by diverse morphologies of lichen on many trees.

It is easy to lose yourself in the afternoon colours and textures of stillness.

Bizarrely, we come across a huddle of Giant Redwood trees, having no idea of how or why they are growing here in Fife. We stop to feel the aged textures of the deceptively soft bark which looks more like dripping lava 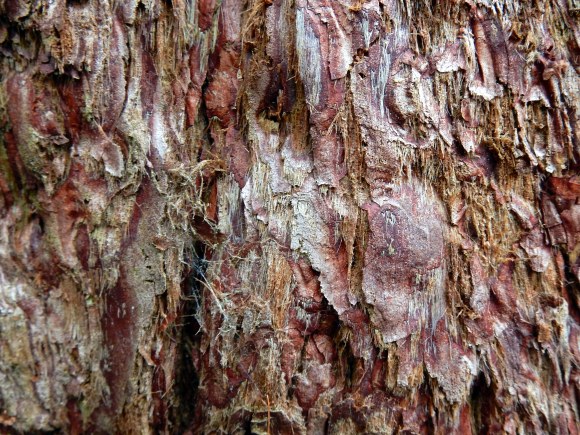 … and in contrast, ephemeral cascades of snowdrops flower close-by exotic looking fungi which resemble some imaginary, animated wood spirits from a Miyazaki film. Organic antenna, as if alert, listening, sensing …

This uncanny world is further transformed by the still body of water which creates a mirror world with only a thin liquid membrane appearing to prevent both of these worlds from collapsing into each other. Herons soar in the sky and amongst the watery depths.

The Heron House is not a place to outstay your welcome. We are the strangers and eavesdroppers here and can sense that our presence has disturbed some fragile equilibrium.

We return to pass through an opening in stone, sodden and marbled by weather and the colours of time.

Within minutes of walking we begin to hear familiar sounds start to puncture the stillness that we still carry.

The distant hum of traffic, a tractor turning over fresh clods of earth in a field. Tending the ground, ready for a new planting, a new cycle.

As long as the earth keeps turning

Now playing: Heitor Alvelos – ‘The Other’ from Faith

Thanks to @EdinDrift for joining us on this journey. February 2017.

The stones hold and keep, the memory of every raindrop 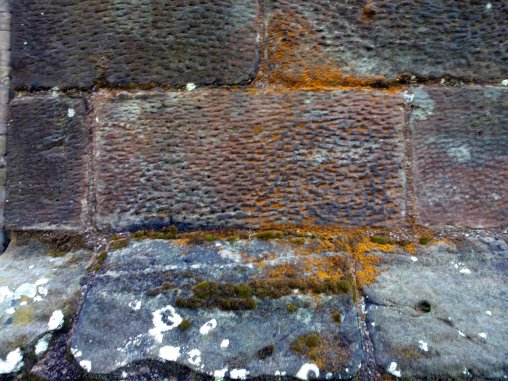 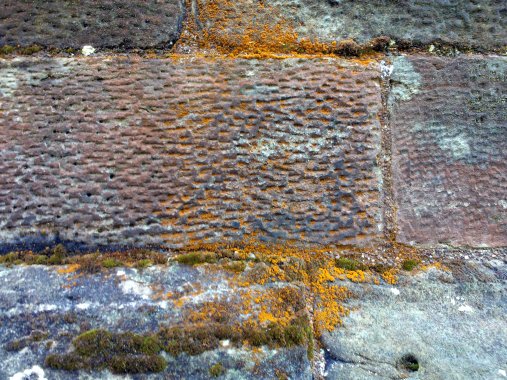 From the North facing walls of Dunfermline Abbey Church.

A church has probably existed on this site since 1070. 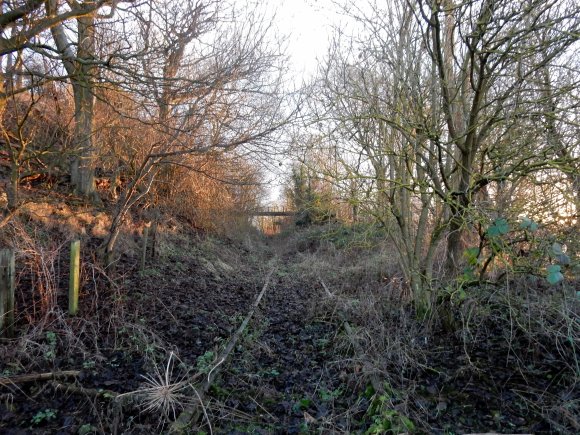 On the path of sleeping sleepers

The small part of the track that we had walked at the end of last year was overgrown but easily passable. The rails and sleepers still intact. We returned a few weeks ago on a day heralding early intimations of another spring to come. That change in light, the soft drone of an awakening insect world and pointillistic bursts of unseen and unidentified bird calls.

The paradox of being off the well-trodden path and yet only following a line to wherever it may eventually lead. We are not sure how far it goes and whether it will be entirely passable.

We almost fail immediately as we soon encounter impenetrable thickets of bramble bushes. (noted for autumn). This leaves no option but to take a slight detour and pick up the line again by sliding down an embankment beside a small road bridge. This looks more promising. The line stretches out ahead. Blue pools trap the sky whilst shadow branches sweep across the cut in the light breeze.

This incision through the landscape is just another example of a history of human activity that leaves its traces and stories embedded in the earth. Field enclosures, drystane dykes, managed woodlands, roads and a network of railways have all left enduring marks on the landscape from the pre-agrarian to the post-industrial.

Prior to construction of this railway line, ox-drawn wagons delivered coal from the Dunfermline pits to the nearest harbour at Brucehaven a distance of around five miles on primitive roads. By the end of the 18th century, growth of the lime industry at Charlestown – which relied on large amounts of coal – led to the construction of the Elgin Wagonway which laid down wooden and then, in 1812, iron rails on which heavy horses pulled coal wagons. By 1852 a fully functioning steam railway carrying freight and passengers connected Dunfermline and Charlestown. Passenger trains continued to run up until 1938 (with a break in continuity between 1863 and 1894). The line was apparently maintained and kept usable to service the Royal Naval Armaments Depot at Crombie, if required, but it is clear from our walk that no train has passed this way for a very long time.

Whilst not the smoothest of conditions underfoot, many stretches offer pleasant walking. The iron rails guiding us under abandoned bridges and then on to long straight tracks that disappear into the horizon. 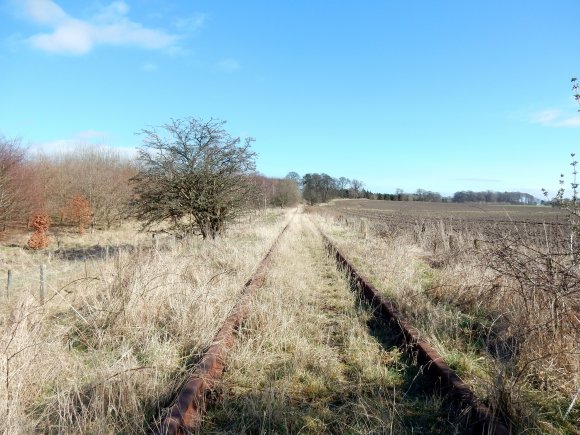 But this is no isolated rural idyll. To the north, the line runs parallel to the A985, one of the busiest trunk roads in Scotland and the white-noise throb of passing traffic is our soundtrack for a mile or so. To the south, the views are over agricultural land, recently ploughed. In the foreground a suggestion of trees:

Occasionally we have to navigate over, under or through some obstacles: 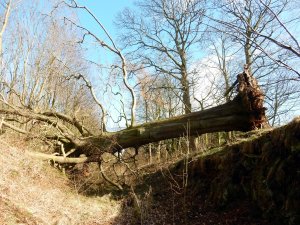 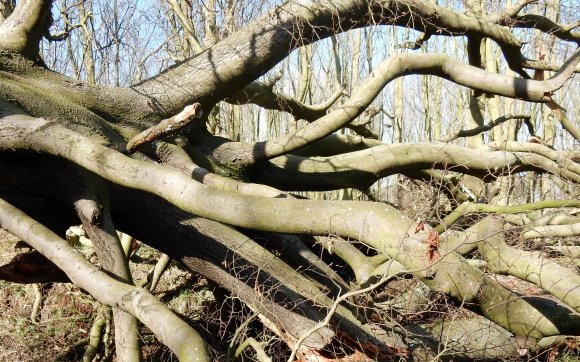 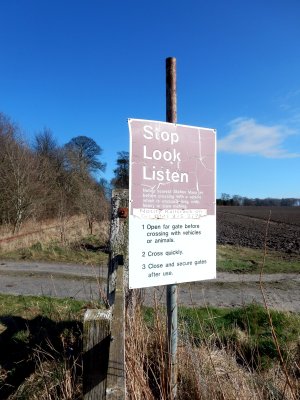 A rooftop eyrie. What creature could inhabit this green island in an ocean of blue?

We wonder how long it has been since anyone has walked the entire line. You are not actively encouraged to walk it with each entry and exit point fenced off. Not surprisingly we encounter no-one.  Our only constant companions are the buzzards who circle high in the sky and the occasional explosion of displaying pheasants. We guess they are escapees from the nearby Elgin Estate where they are bred and shot by corporate middle managers who like to go ‘hunting’. 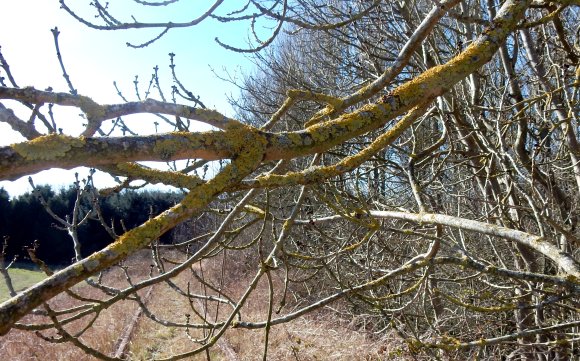 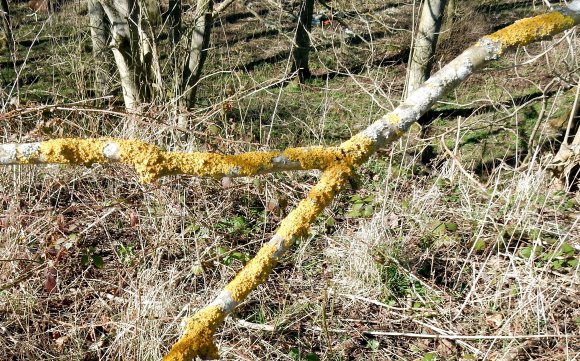 As the line curves northwards towards Dunfermline, we approach the bridge which crosses the A985:

Echoes of a painted relief by Ben Nicholson? 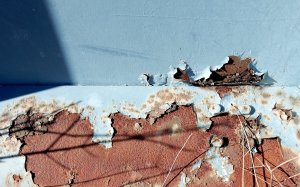 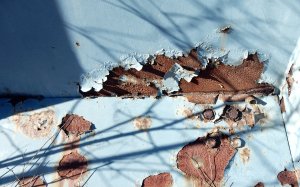 Tracing the cut northwards, we become submerged within the landscape as if walking through a post-industrial holloway. A waterlogged, sodden stretch with tumbled trees conjures up visions of Tarkovsky’s Stalker. Our views of the surrounding land obscured as we walk into The Zone, following the rusting red rails. 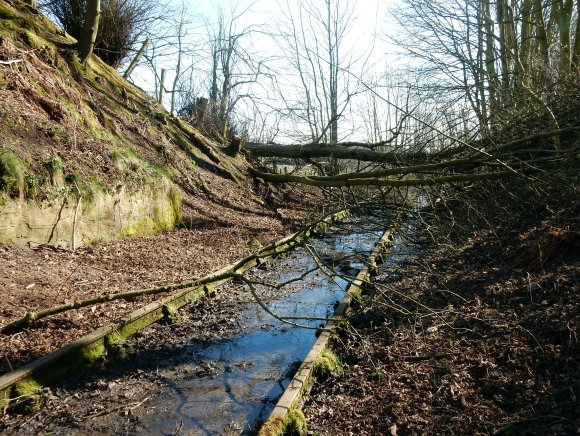 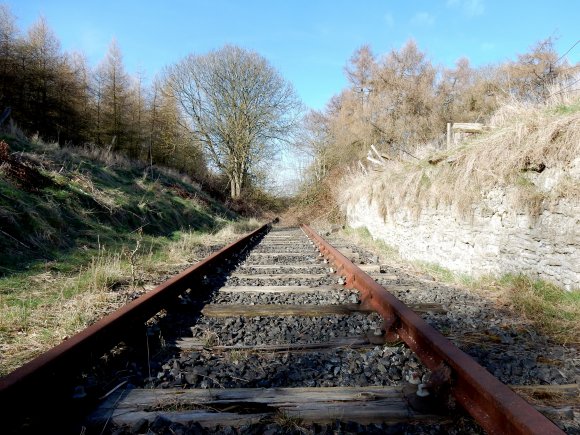 And when we walk, we stroll alongside retrieved memories but also construct new ones. Small pebbles collected and stored: the sun warmed lichen; that particular apparition of trees; the smell of an emerging spring; laces in boots being shredded by brambles.

The sun reflects from the elegant curve of bleached white bone amongst a bed of grey feathers. Ribs sparkle like some primitive xylophone and still attached to the leg, a small dark hoof.  The sweep of bones and sinew appear to retain some residue of movement; of a life-force that has been so abruptly arrested. Who knows what happened to this (we guess) young deer?

Detached and slightly further away lies the white skull, stripped and pecked clean. The downy feather bed suggests that some of the birds who came to feast on the carcass ended up being part of someone else’s meal. 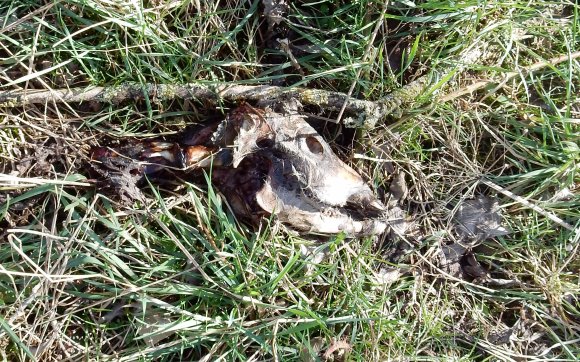 We eventually come to the end of the track alongside a well maintained and clearly operational train line. We later find out that this is Elbowend Junction where the track to Charlestown branched off from the Dunfermline and Alloa line.

The connection is now clearly severed. 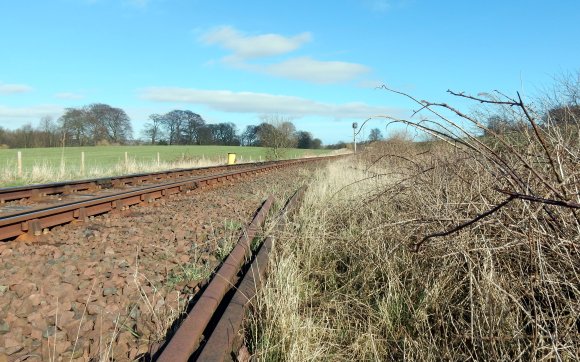 Another mark, a cut, embedded in the landscape, made by human activity and reflecting the ebb and flow of industry and capital. Slowly merging back into the earth a corridor of memory and potential new futures. An incision slowly being repurposed by nature once again.

Once we looked to the horizon.

How can we see now?

in the white wall

a pulse, a tracing

an inscription of breath.

At the ghost pier

the ebb and flow

a redundancy of nails

dreams a wash of

to sit and stare.

On the cliff top,

and at the bench

the edge of the horizon.

Musings from a short walk in the village of Aberdour, Fife, on 28th December 2013.

Thanks to @emmaZbolland for “Pewter light” in response to an earlier tweet of the Ghost Pier.